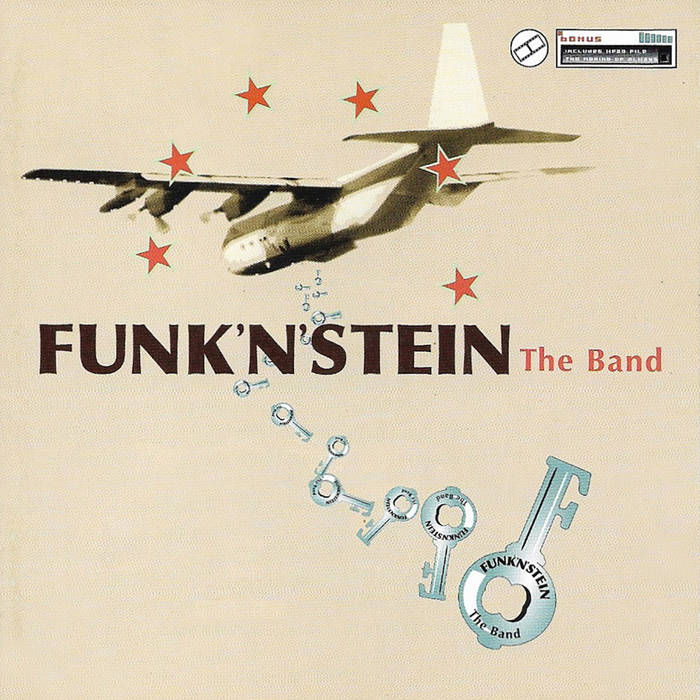 Produced By Elran Dekel, Chakamoon and Ohad Dekel.
Written And Arranged By Funk'nstein The Band.
All Interludes And Jams Including Monkey Politician were recorded At Rehearsing Studios (Janis, Jam Studios, D.B. Studios, Noise, Pluto and Dekels Home Studio) and Edited By Elran Dekel.

* Written And Arranged By Elran Dekel, Chakamoon and Funk'nstein The Band.
Recorded And Mixed By Ohad Dekel At D.B. Studios
Assisted By Amit Berkowitz.(2002)
Come And Join Me - Additional Recordings and Mix By Ohad Dekel At Hammon Studios Assisted By Daniel Yaari and Ishy kornblut.
Additional Vocals on Come And Join Me by "The Shesh Besh Group"(Sharon, Chakamoon, Daniel, Tomash and Dekel)

All other credits as on the main album.

Track Name: Funky Mission
The way of the lord has made us funky
Like he made oceans skies and monkeys
He gave us all a special mission
It wasn’t really our decision

We have seen the funk we're saved
We're gonna mend our ways today, tonight, this year, right now
Find it in your heart it's there
If you think it's hard don't worry
‘Cause we won't stop till you all get saved

We have seen the funk ……
Track Name: W.G.T.A
People killing one another calling it a war
Brothers ganging up on brothers they don’t know what for

We got the answers……
Track Name: Choose Your Way
When all that love has given you is pain*
And all the rays of sun have bore you rain
Frightened that you'll never fall in love again
You know there really ain’t no one to blame

Choose your way that’s your statement
Try to stray look for a gate
Who's to say you choose your own fate
You can never be too late.

Thousands of days have past since you’ve been born
Some days together most of them alone
What the future hides is not for you to see
Like great have said before just let it be.
Track Name: I Want Your Love
Woman let me spend my nights with you
And the days the morning evening noon
I will give to you my sun and moon
Baby let me make you feel good

Girl I know I got a lot to give
And we only get one life to live
There's no way I'll let you get away
When I tell you, you got to stay

Lovely Lady, surrender your love to me
We can grow together and be
All that we will ever need.

I want your love…..
Track Name: Remember Me
So I thought you'd like to meet me again

So I thought you'd like to meet me again

-Well I don’t understand I'm a handsome man
Was there a flaw in my plan?
Man the plan la grand
I went down low I licked your toes
I felt your mom diffused a bomb gave a buzz cut to your dog
I polished each and every car that parked around my house
And it took me years to perfect the slide show I put up for you
And my mom said that it's ok and she will pay for the wall I crashed into when I came to pick you up but you will have to pay for fixing up the car because it was your wall and it was just standing there…..

You try to find…….
Track Name: So Long
I don't want to be the only one
Who stands and sees the setting sun
Wherever I look I see them laughing
They don't give a damn about nothing

So long, since the people got together
And gave something back for what they got
So long, we respected one another
And the ground we live and die on
Sometimes we forget that life is so beautiful under the sun
And we should get together for our future
There's no planet like this one

So long…….
Track Name: People Want More
We lived in the Garden of Eden for a while
Covered with some leaves
Then one very special lady couldn’t fight her desire
And no more walking naked in the streets

We got the FunKey………
Track Name: The Morning Hush
The Morning hush
The huggin' chill
Can you feel
It’s all around
Don’t rush through the morning hush

The evening breeze
The brush of trees
Can you still feel?
Your day your life your way

When eyes cry yours mine
Don’t know why it feels the way it is
Track Name: W.G.T.A
People killing one another calling it a war
Brothers ganging up on brothers they don’t know what for

We got the answers……
Track Name: Always
I know we haven’t talked for sometime D
I think you still got something that belongs to me
I know we shouldn't talk and you want to stay apart
But I can't go on if you still got my heart

You know I love you
Always

There was no other choice but leaving
Now it's harder to enjoy the joy life's giving
It's hard to know, where do I go from here.
But I want to keep on saying
And I want the world to hear

You know I love you
Always

Do you want to make a move
Track Name: Come And Join Me
Come on now
Come and join me
To the place I wanna be

Hey Mr. computer
Get out of your spaceship and come over
We don't use no software here you see
All we got is this little tree

Hey Mrs. Microwave
Where are you running say what's the rush?
You know the pleasure is much higher
When you cook on real fire

Hey Mr. musician
What's that sound you're making?
Take a break and listen to some harmony
Under our tree

Come on now
Come and join me
To the place I wanna be
Track Name: Celebrate Your Mind
Your boobs are great baby
Your hair is soft and smells like flowers
You walk just like a lady
And I can touch your gentle skin for hours

I want to celebrate your mind
Track Name: Good To Be Dead
I'm floating from cloud to cloud
Finally I’ve got a reason to be proud
You all look so tiny from up here
So far but you baby seem so near

I told you I'll love you till the day I die
Now I'm free, I'm free to fly
I still remember till death do us part
Sometimes it's good to have a fresh start

Bandcamp Daily  your guide to the world of Bandcamp

Featuring Oakland sounds from the Smart Bomb collective and Samplelov.